By Bruce Darata on November 22, 2015 in General Appraisal 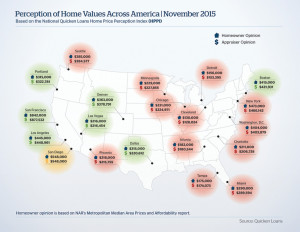 Have you ever wondered what your home was worth?  Have you ever had a challenge with what the appraiser’s opinion of value is?  Every month, Quicken Loans measures the Home Value Index (HVI) and the Home Price Perception Index (HPPI) to identify trends in various metropolitan markets.

Nationally, in October, 2015, the homeowner’s estimation of home value was within 2% of the appraiser’s estimate.  Although that gap appears to be narrowing every month, 2015 has shown a negative gap between the homeowner’s opinions and appraisal value (meaning homeowners though it was higher) for nine months straight. October is the second consecutive month this year that the gap has decreased though.

There are many cities that have shown the opposite scenario occurring: Homeowner’s opinions lag appraisal values…by as much as 4.35% in Denver.  Other cities which have shown a positive difference include San Francisco, Dallas, Portland, Boston, LA and Las Vegas.

So, what’s happening in Chicago? Chicago appears to show one of the largest gaps in HPPI at -2.61%. The average appraisal was $224,971 and the average homeowner’s opinion of value was $231,000. Other cities displaying homeowner’s value perception greater than the appraisal include Charlotte, Detroit and Cleveland. This, despite the fact that nationally, home values have increased 1.07% in October, and 4.01% over October, 2014. The Midwest region as a whole experienced a 0.92% increase in home value, while the HPPI showed a gap of -2.16%.

The trend does appear to indicate that values are catching up with homeowner’s opinion of value, but due to high inventories and a sluggish recovery, it may take awhile for that to happen.

What do you think? We’d love to hear from you! Please Contact Us Today!

The Thompson Center. Should I Stay or Should I go?
Eight More Things Introverts Can Do to Improve Networking