By Bruce Darata on October 6, 2015 in Office Appraisal 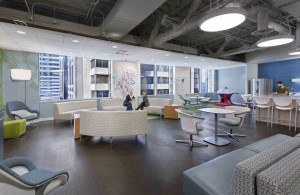 Last week I discussed the current Chicago Office market. In the suburbs there is a fair amount of slow-moving inventory. But the city has strong demand for office space. Why is that? Are companies fleeing the suburbs for the city? Or maybe fleeing the state? Perhaps that is part of the reason. But I don’t think it tells the whole story.

Think about the traditional office as depicted in the popular show “Mad Men”. Executives each had their own office. Files were stored in giant metal file cabinets. Phones were tied to the desk with cords attached. If there were computers, they certainly were not something that could be used from someone’s desk, and they took up massive amounts of space…not to mention the equipment needed to keep it all cool.  In addition, companies were large with individual departments housed on different floors of an office building. Each department had its own agenda and operated as a silo – isolated from everyone else, and no one knew what the other was doing.

Fast-forward to today’s work environment and you will find something significantly different. Recent studies have shown that the contemporary office user is looking for a different work environment than the model of the past. Four of the most significant factors affecting office usage today are collaboration, mobile technology/cloud storage, telecommuting, and urbanization.

The suburban office market is still viable, but it needs to respond to market trends. Most likely, walls need to come down in favor of a more open collaborative concept. There will probably need to be areas designed to support socialization and wellness (hydration stations, snack bars, etc). The expectation is that the workplace becomes an extension of the company culture and the people that feed that culture. In addition, individual office spaces need to be smaller, and the infrastructure needs to be in place to support the technology. Despite urbanization, the suburban office market can thrive by updating current office space to state of the art standards, or perhaps relocating to high density residential areas, that will allow people to easily commute.